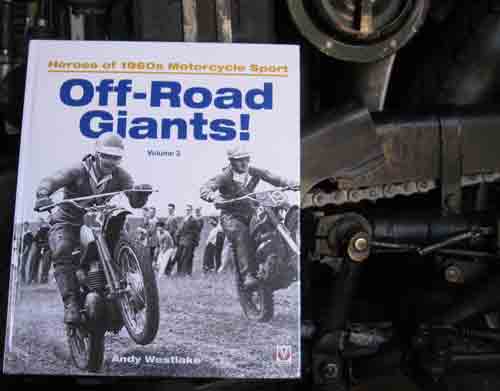 cover of the book, Off-Road Giants!

Veloce Publising Ltd. has done it again.  Off-Road Giants volume 2 is a wonderfully produced compilation of interviews, biographical sketches and beautifully reproduced photographs of off-road riders.   It would be valuable addition to any coffee table, guaranteed to trigger passionate conversations.  In addition, it is a useful reference for the motorcycle enthusiast.

Like the first volume, which was broken into sixteen chapters of featured riders, fifteen British and one American, (Bud Ekins), this second volume focuses on British riders of the ‘50’s, 60’s and 70’s.   Out of the seventeen chapters, there is one that features a woman, Mary Driver, and a few that focus on teams, such as Derek and Don Rickman.  These are the riders who as the forward stated, were “just having a good time riding.”  Many went on to influence motorcycle sports as they exist today.

The author, Andy Westlake’s enthusiasm for the sport allowed him to extract exciting new stories from the riders, many of whom had never been interviewed before.  Apparently, these riders were humble and not likely to talk about themselves unless prompted.  However it is these very stories that document off-road motorcycling history.  All of the riders are aging and once they are gone, so is the opportunity to document their stories.

Although the text is not deep or particularly insightful, that is not the intent of these books.  These books keep a certain history alive.   This is a valuable goal in itself.

(Recently I went to an AMA Supercross exposition at the Oakland Coliseum.   Not content with being a passive observer, I didn’t care for this show.   From my seat the motorcycles were smaller than ants.  I was unable to smell Castrol Oil or feel the grit of the dirt.  More upsetting was the concept that the people sitting around me had no concept of motorcycling history.  The few strangers I asked had never heard of Dick Mann or even seem to care.  In fact more attention was paid to the fight that happened a few rows behind us.)

Volume 2 of Off-Road Giants is a welcome addition to any motorcycling library and we hope Andy Westlake goes on to produce more.