Unbelievable! It’s Saturday and the ride is over. The last five days have gone by quickly and I’ve been too involved socializing and riding to post anything. This long post provides an overview of the week – each day held many adventures worthy of their own posts.
Sunday was all about greeting old friends and meeting new ones, hearing about motorcycle deals, mechanical improvements and riding adventures. This group has a language of its own of compression ratios, breathing tubes, and other aspects of motorcycle maintenance.
Plus there are the human-interest stories. Derek won’t be riding this year due to an injury to his hand that occurred on a ride in Mexico. Jim flew from Australia to Los Angeles and began the ride to the Rally site on the Columbia River but broke down on the way. This is all part of the adventure.
Jeff S. Jeff W. Fred and I quickly fell into a routine. We had breakfast in the camp and left together. They like to ride faster than me – I like to sightsee as I go – so we quickly became separated. Usually they waited for me somewhere along the route. However I quickly learned that it was better to learn the skill of reading while riding in order to navigate my own way. 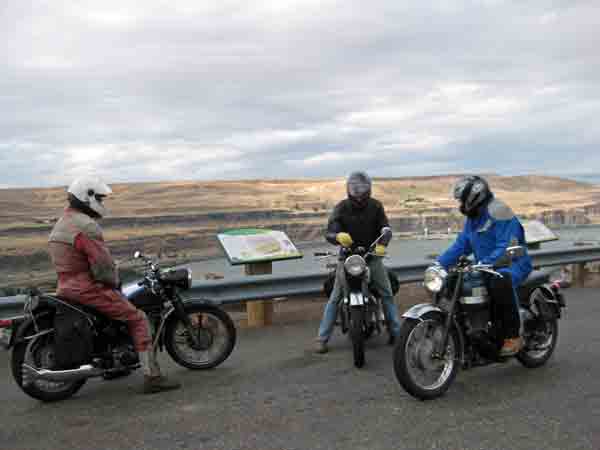 My ride partners, Jeff S. Jeff W. and Fred check their lights. Columbia River gorge is behind them. 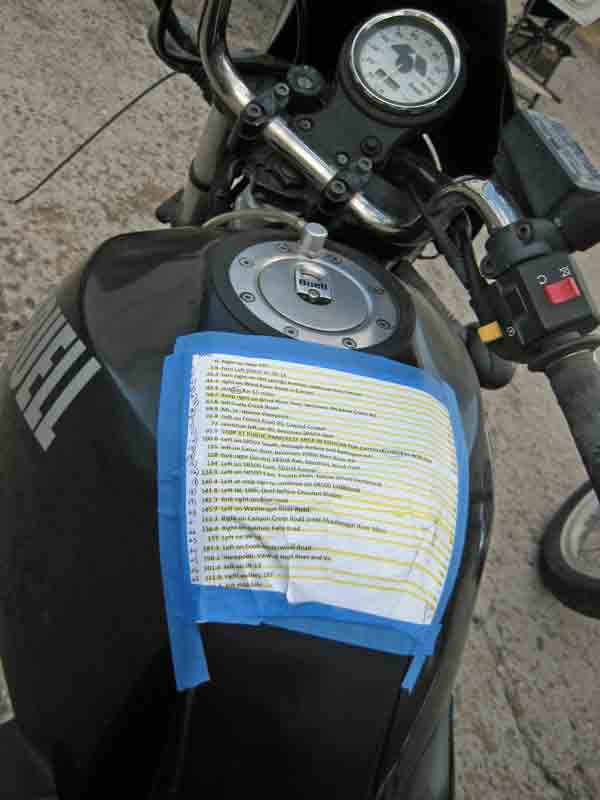 How to read while riding - do not try this at home.

Once we arrived back at camp we all settled into doing motorcycle maintenance. Mine was limited to checking the oil and kicking the tires, but the guys had bigger projects.
Monday featured stops at this year’s president, John S’s shop for parts and information and at the Western Antique Aeroplane and Automobile Museum. 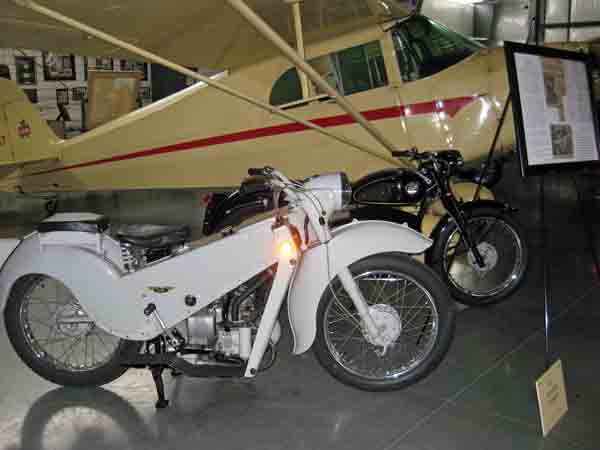 Velocettes on display in the WAAAM

One part of John Stanley's Collection

On this first day, just as we approached the camp at the end of the day, Fred had a flat tire. Fortunately Jeff W. had everything (tube, tire irons, sockets and an air pump) needed to make the repair and get Fred back on the road. 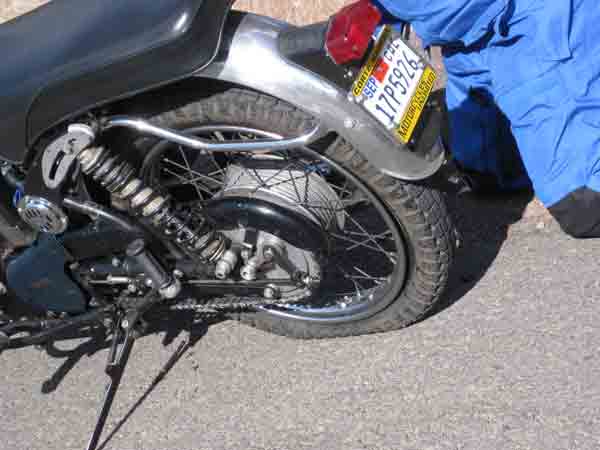 Tuesday we rode into Washington, east to a wind farm and circling round through fields and mountains with magical views. To get back across the river, we took a Hood River Bridge – the entire span of 4,418 feet is steel grate! For two wheel vehicles steel grate is like riding on very smooth ice. Anyway, I didn’t look down to see the river below me, and concentrated on staying relaxed. Years ago someone gave me the best tip for how to ride on such a surface – glide gently from side to side as you go forward. Not only does this give the tires more purchase, it distracts the mind from escalating fear. 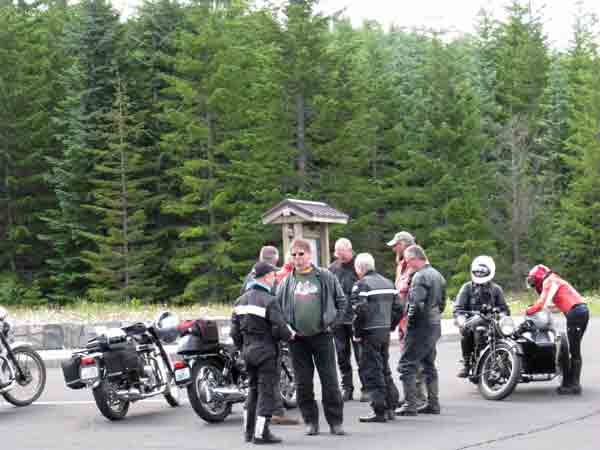 Navigation is part of the Rally

Wednesday we traveled west along the Columbia river on the Washington side, but this time crossed back into Oregon on the Bridge of the Gods which also has a long section of steel grate. From there we went to the Multnomah Falls and then up and over mountains. There was a light mist and damp roads and it only got wetter as we traveled on the southern side of Mount Hood. 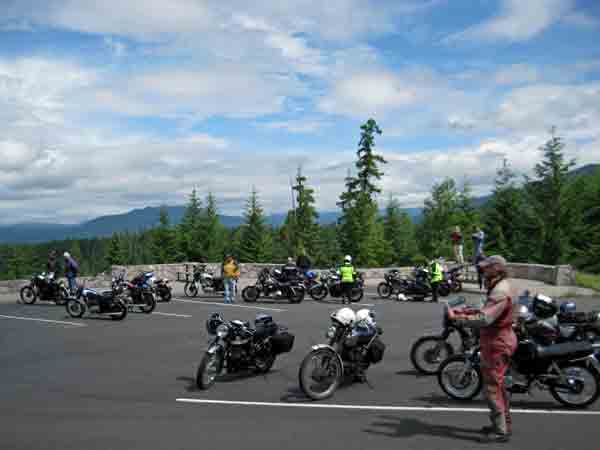 Thursday we headed east along the river and into huge arid fields of wheat. This is a part of Oregon, I’ve never seen before and didn’t even knew existed. Not that it’s flat here. The road went steeply up and down. A video would show a dozen motorcycles and a van disappearing on the down slope only to reappear minutes later as they pulled back up into view. (I should have just stopped my bike and taken my camera out to document the immensity of this vision.) 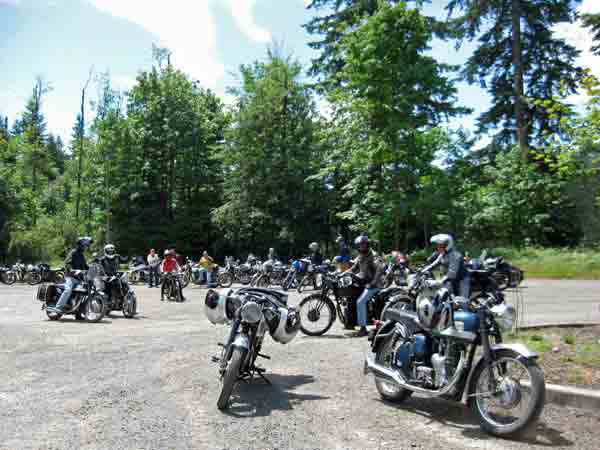 Friday Norlene brought lunch to us on the road

Friday – at last I’m feeling in shape to corner and get into the physical aspects of riding. It’s not about just perching on the seat! We rode back into the wilderness of Washington to get views of Mount St. Helens as well as Mt. Hood.

Jim does major repair in the parking lot

This entry was posted in Velocette & other British Motorcycles and tagged Buell, Lanora Cox, Velocette, VOCNA. Bookmark the permalink.