It looks like I'm teaching Fred, Jeff W. and Amy dance steps, but that can't be right. Nearby is Jeff W's BSA

On the Sunday before Halloween, around 300 bikers gathered to show off their clutch and throttle skills throughout the steep hills of San Francisco. What is especially remarkable is that the majority of these bikes were built before 1974. Many were much older. My riding partners included a Velocette Venom from the early 1960’s and a Velocette two-stroke GTP from 1946. It is hard to believe how much knowledge and coordination is required to ride these older vehicles. Suicide clutches, kick-start ignition, and piston seizures were common concerns. 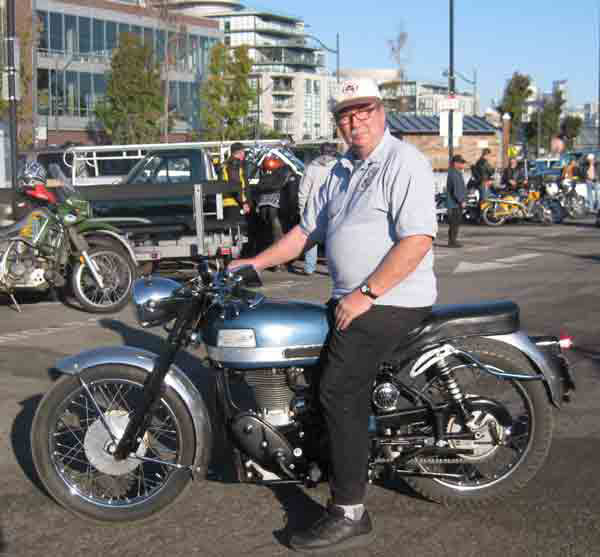 Fred Mork on his Velocette Venom 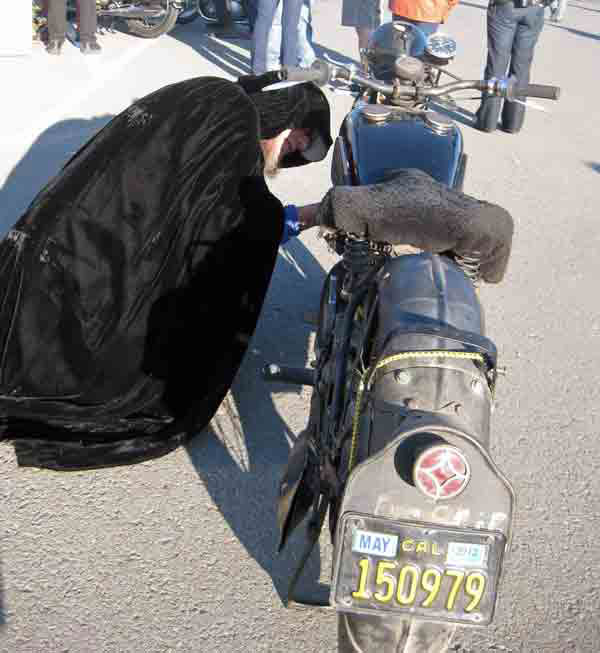 Jeff S has a quiet moment with the Velocette GTP

(I tagged along on a modern motorcycle, but I’ve come a long way from the days when I was afraid to drive my V.W. bug to the Haight)

The timing of this ride is far from ghoulish. Some of the best weather in the SF Bay Area happens in the Autumn. If it’s not raining, it’s clear and sunny and warm – as this day was.

Pete and Kim Young, of the Yerba Buena Chapter of the Antique Motorcycle Club of America, organize this one-day ride that loosely follows the 49 Mile Scenic Drive. This route features many famous San Francisco landmarks, including Pier 39, Fisherman’s Wharf, Alcatraz, the Presidio, The Great Highway, Golden Gate Park, Twin Peaks, and the Castro. However, this ride began and ended at a site that doesn’t usually make the tourist’s list, the Bay View Boat Club.

The Young's sidecar rig. Pete rode with Sirisvati on the back and Atticus in the chair.

Before the ride it was enough to greet the people I know from the Velocette Owner’s Club of North America and related events. George and Satchi Shoblo, Terry and Noreen Norbert, Don Danmeier, Shirley, Frank Recoder, Frank Forster, Jeff Ward and his beautiful bride Amy, Lynn Miller…

The ride followed the waterfront, traveling past Pier 39 and Fisherman’s Wharf and then darting into the City. I was still becoming accustomed to riding with such a large party. It’s not that everyone rode together – there were too many bikes and too many styles of riding to allow that. Still there is a sorting out process. The fast boys have a need to pass… and they will whether you’re ready or not. Other riders are visually trembling with the shock of being up so early on a Sunday morning. Still others are focused on remembering which side the brake is on and where is the clutch. All in all, it means that you need to be aware of your surroundings. You rarely have a lane all to yourself, and if you do, someone is right behind you deciding whether to pass on your left or your right.

So about this dart into the City. My group was in the right hand lane when we saw a volunteer signal that we were suppose to turn left into the city. Here. Left. The driver of the car in the left lane politely stopped back far enough for us to go across his line of travel and into the left turn lane. This was the first of many courteous and generous car drivers we met throughout the day. I guess what they say is true: everybody loves a parade.

So, with all that going on, I was taken by surprise to find myself on the top of Lombard Street. There was nowhere to go but down, down and around, and down the one-way 8-hairpin turns of Lombard Street. I was too busy plying the clutch and brake to pull the camera out, but others have posted photos and views of this acrobatic feat.

Pete has posted photos and links on his blog: Occhio Lungo.

Back along the waterfront towards the Presidio, where there were plenty of detours and unmarked corners. I tucked behind one of the ride hosts, Kim Young and hoped she knew where we were supposed to go. After a complicated scenic route, we ended up at a parking lot for Baker Beach. There was a spectacular view of the Marin Headlands, and the west side of the Golden Gate Bridge. This is an incredible pocket of natural beauty tucked into a forgotten corner of the great city of San Francisco. I overheard many people talking about how long it has been since they visited this site and wondering why they didn’t come here more often. I also spoke with a man, many years my senior, who described surviving a crash when a boulder fell off a hillside and on to him. He rides again today, because the worst thing is living in fear. Hallelujah!

The ride continued following the waterfront in a more southerly direction. Just past Ocean Beach we encountered another San Francisco standby, the fog. There was plenty of car traffic so no one was ride beyond what they could see. In fact, this car traffic became potentially problematic at intersections where there was no traffic control. One lone rider on a Harley pulled his loyal steed into the line of traffic and stopped one direction so that many riders could get through.

The ride stopped again on the top of Twin Peaks. There was a great view of the city below, but most of the excitement was happening within small groups of the ride. Here I was able to speak to many people I know who ride as well as meet people. I love the introductory comment, “Hey, I’ve seen this bike around Vallejo and wondered who rode it.”

The last leg of the route was down the hill, along Market to 16th and back to the Bay View Boat Club. Here a surprisingly tasty lunch of Caesar salad, garlic bread, pasta and beef was served. And there was more time to talk. I met another woman who rides and keeps bees, but I never found out who rode the other Buell Blast on the ride. Hopefully we’ll be on another ride together.

Thanks to Pete and Kim (and Atticus and Sirisvati) as well as the many volunteers who directed the ride at strategic corners. And special thanks to Larry.

View of a parking lot full of motorcycles at Baker Beach